Note: This post has been amended since originally posted to include a table of examples.

One of the measures announced in the Government's 2016 budget was the abolition of 'carbon compensation' payments for those newly claiming a range of welfare payments, including Newstart allowance. Originally referred to as clean energy supplements, but later renamed energy supplements by the Government, they were brought in by Labor to offset the increase in costs caused by the introduction of carbon pricing. The removal of said pricing makes the supplements redundant and so their abolition has a certain logic. However, if the removal goes ahead as announced, the rates of payments for new applicants will actually be less than if compensation for carbon pricing had never been introduced.


As an example, for a person claiming the (usual) lower single Newstart allowance rate, this will mean their payment is not just $8.80 a fortnight less than current recipients (who get to keep the energy supplement), but $3.60 less than it would have been had there been no carbon tinkering. Let that sink in for a moment - in spite of seemingly endless calls for the rate of Newstart allowance to be increased, the Government is proposing to reduce it to less than its pre-carbon price compensation value.

One way to understand this is to consider what would have happened had the Government of the day not bothered to put in place the carbon price compensation arrangements, but instead let the normal indexation of income support rates occur. Here's a column chart to help this along: 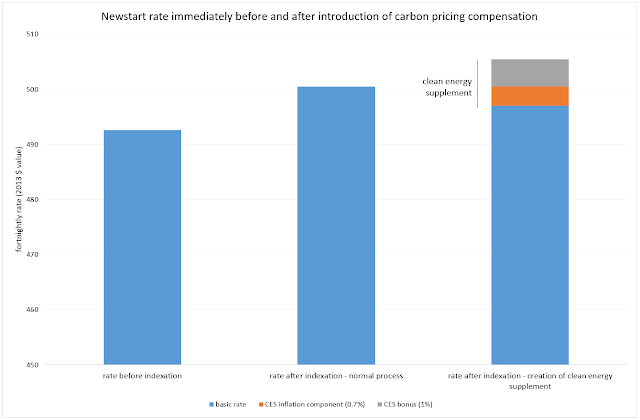 The next column shows the rate that would have applied from 20 March 2013 under the standard CPI adjustment arrangements - a 1.6% increase.

The final column shows what was done instead. Based on Treasury calculations, it was assumed that 0.7 of that 1.6% was attributable to the introduction of carbon pricing. Consequently, the 'basic' rate of Newstart was increased by 0.9% and the 0.7% put into a new rate component. The blue basic rate column reflects this - you can see it has increased compared to the column 1 pre-indexation rate, but not by as much as would have happened ordinarily (column 2). The balance, moved to the clean energy supplement, is shown as the new orange bit. As you would expect, the blue plus the orange is the same total as the column 2 amount.

In addition, the compensation arrangements also included a real increase (ie, above CPI) of 1%, shown as the grey bit. The clean energy supplement ended up being this 1% real increase, plus the 0.7% part of the normal CPI adjustment, giving a total payment of 1.7% of the original pre-indexation rate.

So now let's remove the energy supplement.  If it's taken straight off the rate in column 3 we are left with just the blue 'base rate', which is lower than the column 2 version. It's lower because despite the fact that we've repainted part of the rate orange, it's still really part of the base. Getting rid of it is really just chopping into the 'normal' base rate. The only bit we can justify removing, based on this picture, is the grey 1% real increase.

But what about the fact that the orange bit, and also the equivalent amount in column 2's base rate, is a result of increases in the CPI that are attributable to carbon pricing? Shouldn't this mean that it's still appropriate to remove the full energy supplement (orange plus grey), and that there's actually a problem with the normal arrangement in column 2?

Not at all, and here's why. Just as the introduction of carbon pricing led to a higher CPI than otherwise, taking it away produced a lower result. The CPI still rose, but not by as much. In turn, income support rates that are adjusted by reference to the CPI also increased by less than would have otherwise occurred. This smaller increase has effectively removed the carbon price effect from income support rates, leaving only the original 1% 'real increase' behind.

If whichever government is in power after the election decides to continue with the budget proposal to remove the energy supplement it will be reducing rates by too much. Further examples of just how much are in the table below:

I'm assuming that the apparent meanness of the budget measure reflects a misunderstanding of how the carbon pricing compensation was constructed originally, rather than malicious intent. You can, of course, have a different view.

(One additional point - from the calculations I've done it appears the problem outlined above applies just to payments that are only indexed to the CPI. Abolishing the energy supplement for pensioners (including sole parents on parenting payment) does not result in the excessive reduction. This is because the different indexation/benchmarking arrangements for pensions - in particular benchmarking against male total average weekly earnings - has taken the 'base rate' past the point at which this issue occurs.)
Posted by David at 13:57